A Swimming Hole in Litchfield 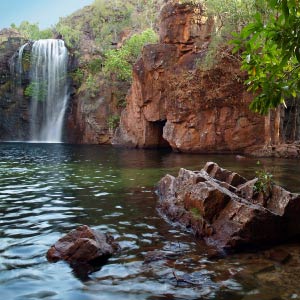 The Northern Territory of Australia could not be better suited for campervan holidays. The natural diversity of the landscape here means you can drive through rainforests, desert, swamplands or mountains all in the same day, all the while enjoying the abundance of unique wildlife the state is famous for. Most visitors flying into Darwin will head to the renowned Kakadu National Park, Australia's largest and most recognised National Park. However just a two hour drive south west of Darwin lies Litchfield National Park, a place of rugged mountainous beauty that is becoming one of the leading tourist attractions in the state, and for good reason. With sealed roads leading to most of its attractions, it is the perfect option for a daytrip in your campervan hire Darwin. Its large size and the range of things to see here mean you could easily spend a lot longer enjoying the tropical wonders of Litchfield.

The Tabletop Ranges form the centrepiece of the attractions here. Litchfield is renowned for its waterfalls, and the four largest falls all flow down the rocky sides of these ranges. The heavy rains of the monsoon season make these falls especially impressive, sending large volumes of white water crashing down them. The rest of the year they are a lot tamer, and the rockpools at their base make for excellent swimming. Unlike Kakadu there is no threat of estuarine crocodiles here, although at Tolmer Falls swimming is restricted to protect the colonies of ghost bats that reside in the caverns and caves of the gorge sides. Tolmer is still worth a visit for the commanding views it gives over the woodlands and wetlands that stretch away from the base of the Tabletop ranges, and of course the view of the high waterfall and its steep sided gorge.

Of the other three falls, Wangi, Florence and Tjaynera, Wangi is the most popular followed by Florence. Wangi has a well established campsite with all the facilities you would want such as hot showers, toilets and a kiosk, which makes it a great place to base your campervan hire and explore the rest of the park from. It is just a short walk from the carpark and the camping ground to the refreshing rock pool at the base of the falls, making this a convenient and easy place to visit. Like all the gorges in the Tabletop Range the vegetation here is thick and tangled rainforest, which contrasts with the sandy and more barren hills at the top of the range. It is diversity like this that makes Litchfield such a special place to visit.

Florence Falls also has a camping site, but isn't as busy as Wangi, possibly because of the steep walk to the rock pool at its base. There is an alternative walk, that is longer but more picturesque, taking you through the monsoon forest along the banks of the creek and then down to the rock pool. There are great picnic facilities at Florence, with BBQ spots built in a serene and shady setting. Close to here is another attraction, Buleys Rockhole, which is a series of small pools, waterfalls, and rapids that is a great swimming spot for kids. Rock slides and whirlpools are the ultimate natural playground!

One of the first places of interest after entering the park are the magnetic termite mounds. These tombstone shaped mounds are built in perfect north-south alignment so that exposure to the sun is minimised and the conditions are kept optimum for the termites to live in. Each termite mound is a tribute to the creativity and engineeering of the termites, with chimneys, tunnels, nurseries and insulation. a boardwalk lets you get close to these amazing features without damaging them.

Another weird and fascinating place in Litchfield is the Lost City, a series of bizarrely shaped sandstone rock formations that rise out of the soil like the ruins of a lost civilisation, even though they are a naturally formed geological formation. Thousands of years of wind and rain erosion have created the walls, passages and domes that make these formations look like something created by man rather than nature, hence they have been given the name 'Lost City'. Bear in mind that you can only access this area by 4WD, so if you are in a 2WD campervan you will run into problems!

Once the best kept secret of the Northern Territory, Litchfield National Park now attracts nearly a quarter of a million visitors a year, and none of these people leave disappointed. Its a perfect place for people on a campervan holiday to explore the wild beauty of this state without having to travel too far from Darwin. The freedom of a motorhome will let you roam the park to your hearts content, and take in everything it has to offer, and the campsites dotted throughout the park will provide places for you to base yourself. Best you get in quick though, before it starts to get really crowded!