Esperance - A Secret No More! 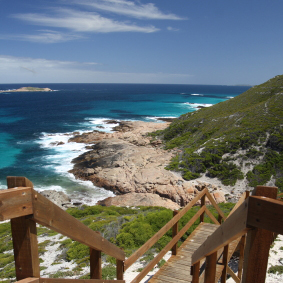 Its called the 'Secret South' - the length of Western Australian coastline next to the Southern Ocean that until recently has been largely ignored by the tourist masses. But as travellers get more intrepid and even the most far flung places become more accessible this is one secret that is out the bag.

In the summer months the full hotels, motels and caravan parks in Esperance, the largest town on the coast, are testament to the growing popularity of the region. And there's a lot to see there - its a place you go to appreciate nature, to indulge in the wide open spaces and the fresh air of unsullied landscapes. For campervan hire holiday makers, it's an unexplored treasure.

Esperance sits quietly on the shores of Esperance Bay, surrounded on either side by miles of isolated beaches. If its a bit of privacy you're after then you have come to the right place - just hop in your campervan hire perth, drive for a while and find a quiet spot on the beach! You might have to share it with some of the kangaroos that enjoy baking in the sun on the white sands, but they won't disturb you.

The beaches here are claimed to be the whitest in Australia, and the contrast of the sand dunes with the bright blue water is quite stunning. There is a drive called the Great Ocean Drive which takes you on a 38 kilometre loop past the best beaches in the region, including West Beach, Chapmans Point and Twilight Beach. If you're a surfer then you really will be in heaven, as some of Australia's best waves are along this stretch. Remember though, that this is the Southern Ocean... things can get a little chilly in there!

On this drive you will also be taken past the Pink Lake, which is quite a talking point of the region. It is actually a pink lake, although depending on the weather conditions it can be purple too! The colour is attributed to the high concentrations of salt tolerant algae in the water. The salt here is actually 99.9 per cent pure, and is harvested and transported around the country. It's a peaceful and unique spot to spend some time, and there are camping grounds and other forms of accommodation around if you wish to stay a little longer.

Off the coast of Esperance lies the Recherche Archipelago, the largest group of islands in Southern Australia consisting of 105 islands spread over 270 kilometres. While most of these islands are inaccessible to humans, Woody Island is accessed from Esperance and is a popular wilderness retreat. It's a beautiful spot, with that sun soaked atmosphere typical of tiny island holidays. There are day charters out to the island, or if you want to stay longer then a safari hut set amongst the native plants is your choice of accommodation, complete with views over Shearwater Bay!

There are three National Parks close to Esperance - Cape le Grand, Stokes and Cape Arid. While all three are worth a look, Cape le Grand comes as the most recommended. There are two campsites in the park, the best one sits on the shores of Lucky Bay and has solar powered showers! Lucky Bay has the distinction of being voted the 'whitest beach in Australia', so a stay in this campsite is definitely a good idea. If you dont have a four wheel drive campervan then stick to the Western side of the park, which has fully sealed roads. If you do have 4WD, then take the adventurous route and drive up to the cape along the beach. If the season is right you may just see pods of whales surfacing off the coast with their new born young. The Park is only 50 kilometres east of Esperance, so it is very easy to access.

While the town itself is a pleasant place to stay and has all the accommodation options you may want, it is not awe inspiringly beautiful, and is more functional than aesthetically pleasing. It has that country town feel, and the people are extremely friendly, so your stay is going to be very pleasant. What is awe inspiring are the surroundings. The beaches alone are a good reason to visit here, and with other attractions like the Recherche Archipelago and the nearby National Parks to visit, your holiday here won't be a disappointment. You can choose to fly in - it's a one and a half hour flight from Perth - or make the drive from another Western Australian Centre. Its 720 kilometres to Perth, and 476 kilometres to Albany. These are long distances, and there's a lot to see in them, so why not make a tour of it and spend some time exploring the coast along the way. Think of Esperance as the cherry on top of the cake... the mouth watering finale to your foray into Western Australia's 'Secret South'!