Barrington Tops And The Hunter Valley

Waterfalls Abound in the Tops 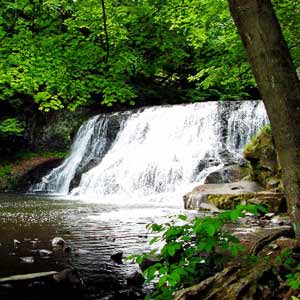 The entire Hunter region, including the beautiful Barrington Tops, can only be described as breathtaking. The Hunter Valley is one of the largest river valleys on the NSW coast and is best known for its scenic hectares of grape vines and wineries. The flavours and the bucolic serenity of the Hunter Valley is a great contrast to the heights of the Barrington Tops. The Hunter Valley moves at a slower pace, which is why people are attracted to its towns, national parks and natural beauty. The three national parks in this region have Aboriginal sites offering the unique opportunity for an indigenous cultural experience. With the choices of adventure sports, bushwalking and sightseeing, wine and food tasting, or just doing absolutely nothing, this is a great region for roaming in a campervan.

Most of the population of the Hunter Region lives within 25km of the coast, with the majority of the population living in the cities of Newcastle and Lake Macquarie. There are numerous other towns and villages scattered across the region. Newcastle remains the economic and trade centre for the Hunter Valley and for much of the north of New South Wales.

The port city of Newcastle was first settled in 1801 and still has some of the most beautiful heritage-listed buildings in Australia, including one of the oldest theatre districts in Australia. The Victoria Theatre on Perkins Street is the oldest purpose-built theatre in the country. The old central business district, located at Newcastle's eastern end, still has a considerable number of historic buildings, dominated by the Christ Church Cathedral, one of the most magnificent churches in NSW. Other noteworthy historic sites include:

There is too much heritage in Newcastle to list it all here, so you will just have to go exploring in your campervan and discover it for yourself.

In the city of Lake Macquarie, you can relax and escape from the fast pace of life in whatever setting you prefer - beach, lake or mountain. The city's centrepiece is a vast blue water expanse, twice the size of Sydney Harbour. Lake Macquarie is traditionally a city of artists, so a must-see is Dobell House, home and studio of the late world famous artist and three times Archibald Prize Winner Sir William Dobell. Of course, the city offers everything in the way of water sports.

Driving through the Valley, you will come across colourful towns such as Branxton, Dungog and Greta, famous for their markets and festivals. Kurri Kurri has a fascinating mining museum which the kids will love. The historic town of Wollombi will take you back in time, as the village was the administrative centre of the district in the 1830's. Many well-preserved buildings remain in the Wollombi village and surrounding area, as well as remnants of the Great North Road. Take the Historic Wollombi walk or follow the Convict Trail to experience some of the town's convict history. The central village of the Hunter Valley winery region is Pokolbin, located west of Cessnock. There are over 50 wineries in this region, producing many well-known wine labels, such as Tyrell's Vineyards and Wyndham Estate. Potters Brewery, established in 2002, was the Hunter Valley's first microbrewery, is located in the heritage listed "Brick Beehive Kilns of Nulkaba". You can take your time chatting to the locals while enjoying the luscious food and wine of the valley.

The world heritage-listed Barrington Tops National Park is famous for its fast flowing rivers and waterfalls, steep gorges and magnificent rainforests. There are ample camping grounds at Barrington Tops, such as Camp Cobark, or further out (at Gloucester) is the Devils Hole Camping ground, located 1400m above sea level. The Barrington Tops Forest Road is famous for its many different types of rainforest, including the ancient Antarctic Beech Forest. This road will take you to lookouts such as the Devils Hole, Moonan Lookout, and the Polblue plateau. The Chichester State Forest, inside the park, has the largest oak tree recorded in NSW. The climate is generally cooler than the coast throughout the year, but every season has its own advantages. Winter brings snow-capped mountains and crystal clear mountain streams and summer is more comfortable for bushwalking in the higher altitudes. It is advisable to come prepared with spare warm clothing in case of sudden temperature changes, no matter what the season.

The Hunter Valley region is one of those areas that seem to be designed for touring in a campervan. Every curve in the road brings you to a new panorama, every town and hamlet is full of its own character, and the delectability of local food and wine is extraordinary. You could spend a month there and still find something new to see or do every day. So let us help you plan you getaway today.