The Famous Jetty at Busselton 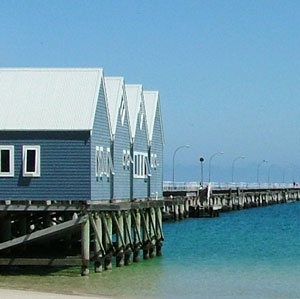 When thinking of Western Australia, images of hot desert landscapes sweltering under a ferocious sun come to mind. But 200 kilometres south of Perth is the Busselton/Margaret River region, where inland forests, elaborate coastline and fertile farmlands belie this desert stereotype. The town of Busselton lies on the shores of Geographe Bay, whose thirty kilometres of sweeping white beaches are celebrated in travel books the world over. An award winning force in the tourism industry, Busselton is the perfect place to visit on your Perth campervan hire holiday because of the wealth of nearby attractions waiting to be discovered by you!

As one of Western Australia's earliest settlements, tourists have been visiting Busselton for decades now. Being a seaside town, much of its pull factor lies in the picture perfect beaches near the town. The water is startlingly blue in this part of the world, and the temperate climate of warm summers and mild winters makes it suited to a coastal holiday most of the year round. The waters of Geographe Bay have a diverse array of tropical and sub-tropical species of marine life, boosted by the Leeuwin current that flows in during the autumn and winter. Scuba diving and snorkelling are a common recreational pursuit, one where you can expect to be blown away by amazing colours and all the oddities of the underwater world!

One of Busselton's main features is the Busselton Jetty, a heritage listed wooden jetty that extends two kilometres out from shore into the waters of the bay and is the oldest wooden structure in the southern hemisphere. It is recognised as being one of the top ten dive jetties in the world, and more than 300 individual marine species have made their home around the large wooden structure. The best thing about the jetty is you are able to get up close and personal with the marine life without actually getting wet! You can do this via the Underwater Observatory located at the end of the jetty. The dome shaped structure with immense glass windows is not unlike a fishbowl, except that the people are on the inside! Dolphins and seals are regularly viewed swimming, feeding and playing around the Observatory, as are colourful coral and multitudes of tropical fish. There is a small train that takes visitors over the jetty and out to the Observatory.

Busselton is seen as the northern gateway to the Margaret River Region, an area renowned for its forests, farmlands and attractive vineyards. One of the premier wine producing districts in Australia, you should allocate at least one day where you hop into your motorhome and tour the various cellar doors in the district. Many vineyards have a restaurant on site, so complement your wine tasting with a fine meal, and take home a couple of bottles of the regions finest! The fertile soils also mean there is an abundance of fresh produce, so you can buy anything from cheeses to olive oil, beer, jams and chocolates; perfect for stocking up your picnic baskets.

If you have visited in the spring time you are likely to see the colourful fields of wildflowers that have come to characterise the south west of Australia. People flock into Busselton to see the bright pinks and red of the boronia flowers and the multi coloured kangaroo paws that drape the landscape. The Ludlow Tuart Forest, seven kilometres out from Busselton, is a popular place to view the flowers, and is also home to the only stand of tuart forest growing naturally in the world. The trees here are estimated to be over 300 years old, and there are many designated walking trails that take you through the peaceful forest.

Being such an old and established town, Busselton is steeped in heritage that is evident in a number of buildings and structures in and near the town. The Cape Naturaliste lighthouse was built in 1904 on a headland overlooking Geographe Bay, and is an easily recognisable feature of the region. It's perfect for those sunset Kodak moments, and can be seen on thousands of postcards. In the town itself is St Mary's Church, the oldest stone church in Western Australia, and nearby lies the state's first butter factory.

With such a wide range of attractions on offer, Busselton promises to make any campervan hire holiday here an exciting and full time. The variety of accommodation options in the town is complemented by the range of venues for eating out or having a fun and social drink. Outdoor activities such as cycling, canoeing and fishing are extremely popular here as well, so whatever kind of holiday you are looking for, Busselton will have it covered!