The Highs And Highs Of The Adelaide Hills

The Ruins at Marble Hill 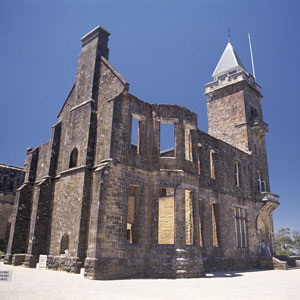 So Adelaide isn't the craziest city in the world, but as in all urban conurbations there is still that general busy vibe produced by lots of people around you are going about their daily nine to five. It never becomes too overpowering in Adelaide however, and this is partly thanks to the close proximity of the Adelaide Hills whose serene and tranquil atmosphere creates the perfect balance for the more hectic city life. Just a twenty minute drive from the city centre in your campervan hire, the Hills are an easily accessible destination with a myriad of touring opportunities for a campervan holiday. Lush forest, cosy towns and magnificent views are just part and parcel of what you can expect here.

The Adelaide Hills were initially settled by the Germans, and their influence still runs thick through the towns here. Especially famous is Hahndorf, Australia's oldest surviving German settlement having been established in 1839. Many of the buildings first built here are still standing, and the elm and plane trees that line the streets are a century old, which helps create an air of historical significance. Shops selling wursts, cakes and other decadent German confectionery line the streets and add to the Bavarian character of the town, as do the numerous German tourists visiting this slice of their homeland.

A town with a more English feel to it is Macclesfield, which lies deep in the Hills about an hours drive from Adelaide, and is surrounded by pleasant farmlands, vineyards and natural bush. It is built around a village square that historically was the hub of a major transport route during the gold rush days in the 19th century. Today it is less busy, but there is an excellent English style pub here where you can sit down and have a hearty meal and a pint. Every Sunday the square comes alive with the sounds of farmers from the surrounding regions setting up stalls and selling off their fresh produce to the public.

The Adelaide Hills are as much about natural beauty as they are about the beautiful towns, and the best place to fully appreciate this is at Mount Lofty. The summit here is the highest peak near Adelaide, and there are stunning views not only of the hills and valleys nearby but also of the Adelaide Plains, Kangaroo Island and Yorke Peninsula. The summit is situated in the Cleland National Park, which is also home to Waterfall Gully on its western side. This large waterfall is a popular spot for tourists, who are able to park their cars in the large carpark and then make the short walk to the falls. There is a pleasant restaurant and a kiosk here.

There are a couple of wildlife parks in the Hills that your kids will just love. Cleland Wildlife Park is close to Mt Lofty, and visitors are able to walk through large enclosures and interact with Australian animals such as kangaroos, koalas and echidnas. Warrawong Wildlife Sanctuary is bigger and is just 20 minutes out of Adelaide. Home to over 100 species of bird and animals, this is the perfect opportunity to experience the Australian bush and wildlife in a protected habitat.

There is a strong sense of culture in the Adelaide Hills, whether it be in the German settlements or in the art galleries and museums that are scattered throughout the towns and countryside. The National Motor Museum in Birdwood is an intriguing place to visit, housing more than 300 vintage, veteran and classic motor bikes and bicycles- the largest collection in Australia. Arts buffs will enjoy visiting the Cedars, the old home and studio of famed artist Sir Hans Heysen. Still owned by his family, here you can see his painting materials, tools, sketches, notes and much more.

To round off your motorhome holiday in the Adelaide Hills why not go for a tour of the numerous cellar doors in the region and sample some of the local produce? The hillsides and valleys here are lined with vineyards, and the crisp wines they produce are notorious the world over. Good food and good wine always seem to go hand in hand, and the restaurants and cafes here match the quality of the wine with the culinary dishes they produce. So go ahead and indulge in the complete dining experience! The best thing about the Adelaide Hills is that if you only have a single day free you can get there easily and still have a lot of fun touring round. But if youve got a couple of weeks free, even better... you're going to want to stay as long as possible!